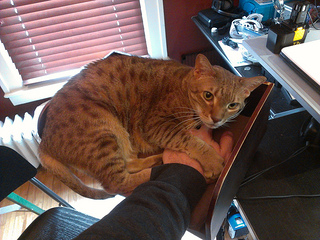 Our cat Puck died last night. He would have been 15 in July. That’s pretty good for a cat, all things considered.

He was my buddy, and he would cling to me like a little monkey when I picked him up. He followed me everywhere. He cried when I left the house without him. For much of his life, he would be the first thing I saw when I woke up, because he slept curled up close to my chest at night. He purred when I opened my eyes and stirred awake. 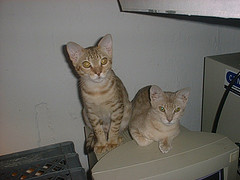 I got him and his sister Inanna (also departed) as kittens just before I met the girl who’d later agree to marry me. They were the first pets I'd ever owned on my own. He was there for me through a significant chunk of my life, happy and sad and everything in between.

Big changes between the ages of 25 and 39 - different jobs and lots of moving: living with roommates, living by myself, living with the girl, getting married to the girl, moving cross country and back. He went pretty far for a cat, having flown with us from Michigan to California and back again. But, of course he hated travel, having reserved a peculiar howling meow for car rides that was impossible to ignore. 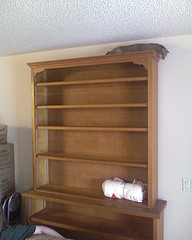 As I’m writing this, a calendar alert popped up. Reminding me to give Puck his meds. I’m going to have to delete all those reminders. I’ve watched him get older, walking a little slower and taking breaks on his way through the house. He wasn’t the same kitten I knew who would leap from the floor to the top of a bookshelf almost seven feet high. He’d started needing special care, started leaving messes around the house.

I’m in a strange place of terrible sadness and yet relief and yet terrible guilt over that relief. I’ll miss him, but I won’t miss the constant vigilance to catch him before he soiled the couch. I won’t miss keeping on top of pills and injections and special food. I won’t miss the sad moans when I closed him up in the attic for the night by himself. (The alternative was waking up in the wee hours to fights with the new cat Catsby. Or, waking up to him making a mess in his favorite spot next to me on the bed.)

The night before last, we took him to the vet and got news that he was seriously ill. We were advised to keep an eye on him through the night, so I stayed with him on the couch in the attic.

I hauled my CPAP machine up there, figuring we’d fall asleep together like old times. I didn’t expect it to turn into an overnight vigil - but every time I came close to falling asleep, he’d do something to wake me back up. A meow, a moan, a few times even a paw to my face. There we were, laying together on the couch, or sometimes the carpet, watching the sky outside gradually lighten.

Maybe he was excited to have me there or maybe it was just the new meds, but he wanted my attention. I spent a long time petting him and rubbing his belly. He kneaded my arm and rubbed his head on me. We spent long minutes just looking at each other like we would when I woke up with him on better days.

Yesterday, he spent most of the day at the vet’s. They ran tests, got some new meds into him. It was bad, but it seemed like he was responding to treatment. 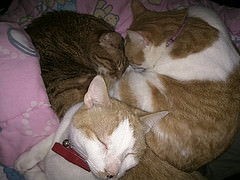 We got him home and he spent the rest of the evening curled up in his favorite spot on the couch. Cheddars and Catsby, our other two cats, came by and visited him. Catsby, in a departure from his usual too-enthusiastic attempts to play, bathed Puck’s face and ears and eventually curled up around him.

Close to midnight, exhaustion caught up with me from the sleepless night before. Puck seemed okay, or as well as could be expected. I carried him up to the attic and put him on a soft blanket in front of a heater. He moaned, but settled in. I got him to eat a little more, spent some time petting him, told him good night. He cried as I went down the stairs and closed the door behind me. I told myself that he’d be okay in the morning. I couldn’t do another night like the one before, I was just too tired.

The girl woke me up early this morning. He hadn’t come down the attic stairs to demand his release like usual. Instead, he’d found a quiet corner, laid down comfortably, and passed away. I feel terrible. I don’t think there’s anything more we could have done for him, but I wish I’d been with him in the end. 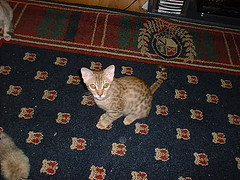 And now he’s gone. One last car trip, the first he didn’t howl all the way through.

All in all, I think (I hope) Puck had a good life.

He played an oversized part in my life, pampered and never wanting for much. I know he was a cat, and there were a lot of things he couldn’t understand, but he really seemed to know when you needed him close.

He was my best friend and a big piece of me goes with him.