TL;DR: I get conflicted about hosting & running a community site 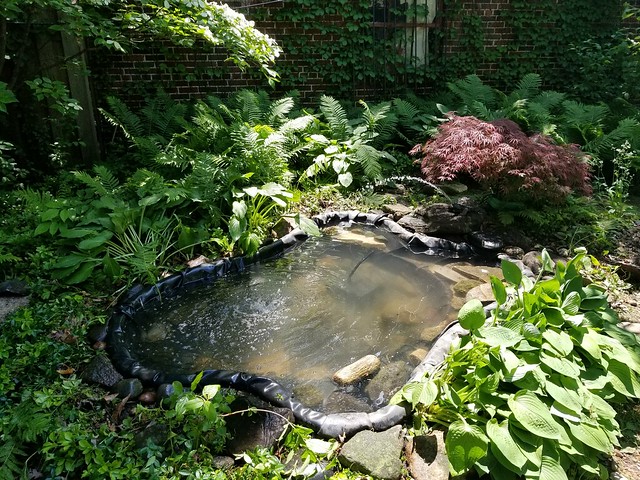 Last fall, we bought a house with a pond in back. At first, I didn't really want it. I had a notion to fill it in, maybe replace it with a fire pit. By spring, we decided to keep it.

It's not a large pond - 6' x 7' x 2' and roughly butterfly-shaped. It's got a little turtle that spits water pumped up from a filter box on the bottom. The pond liner is hard plastic, like a kiddie pool, covered in gravel and rocks to add a more natural look. The whole arrangement is probably 10 years old.

In March, I drained it, cleaned it, refilled it, started the fountain again. As I got busy over the next weeks, I discovered the liner had leaks - mainly cracks from the aforementioned rocks over many seasonal cycles of freeze & thaw. I had to keep adding water to maintain the level: if it dropped below the fountain's filter box, the pump made horrible noises as it ran dry.

I got tired of wasting water. So, I turned off the pump and let things go while I researched next steps. It was about a week before I acquired a new rubber liner - and then another few days of rain before I had a sunny weekend day to work on it.

As it turns out, that's just enough time in May for a not-quite-empty backyard pond to transform into a murky swamp teeming with wriggling life. Mostly mosquito larvae, but there were plenty of other things I didn't quite recognize. So, I cleaned the whole thing out again, starting over with the new liner. It's back in business again - the water's stayed put and been clear for a week so far.

TL;DR, Here's the thing about a pond in your backyard: It's a responsibility. Water and debris collect. It attracts wildlife - some kinds less desirable than others. Left unchecked, it becomes a smelly, stagnant soup that can present hazards to yourself and your neighbors.

Thinking about this reminded me of something else: A few weeks ago, I was tinkering with setting up Mastodon instances. I bought some cheap domain names, set up some virtual hosts on my hobby server. They're all working - but I stopped short of opening up account registration.

I was suddenly aware of a feeling of anticipated responsibility. Each of these Mastodon instances would be backyard ponds. I'd have to keep the pumps running, make sure to skim debris. I'd have to monitor for wildlife setting up homes in and around them. I'd have to work to keep these things from becoming hazards to myself and my neighbors. Hell, I could even be exposing myself to legal peril through what I might inadvertantly enable through neglect.

And, for what? The pond in our backyard has been a nice feature. I've spent a few hours by it with my laptop. My wife seems to like it fine. Maybe some friends & neighbors will enjoy gathering around it this summer. In contrast, the prospect of hosting social media watering holes for internet randos - let alone acquaintances and friends - fills me with dread.

So, that's me. I'm not going to stand up a public Mastodon instance unless I convince myself that taking on the responsibility will pay off. I haven't imagined a good scenario yet.

But, what about other folks?

Consider the generous admins who run instances of Mastodon & GNU Social & PostActiv & everything else that participates in the OStatus federation. Those folks all have their reasons and I think they've accepted the responsibility to keep their ponds running clear. At least, with consideration for varied local definitions of "clear" in codes of conduct and whatnot.

Do these folks not feel any of the dread & responsibility I felt even considering setting up my own ponds online? Their ponds smell swampy. Their filtration pumps are not great. They leave things unchecked, because treating the water would eat into (or completely wipe out) the value extracted from the wildlife. The usual excuse is expense and difficulty, with an occasional lazy handwave at "radical free speech" as a rationalization.

But, could I get away leaving my pond as a Petri dish? I suspect the neighbors - and maybe the local authorities (including my wife) - would have something to say about it. That said, I'm not sure who or what could nudge these pond owners into cleaning up their water. Maybe there'll be some laws - most likely ineffective or disastrous. Maybe all the valuable wildlife needs to migrate away - but we all seem not to mind the stinky water enough to leave yet.

Maybe we need more ponds run by people who care - and who get rewarded for the effort. More cooperatives and more volunteer efforts. Maybe some actually for pay! Each on smaller scales, because people can only take care of so much water & wildlife. But, I don't have great ideas on how to make this happen. I guess that's what inspired me to tinker with Mastodon instances - I'd like to see cleaner ponds. I just fall short of actually wanting to take on the responsibilty. Or feeling like I'm the right guy to do it.

Anyway, I guess that's a fuzzy realization I've had: In more traditional social gatherings - like house parties or conventions - there's so much emotional labor and organizational effort that chews up value. In trying to mechanize things, the whole ad-supported social media industry seems powered by as little care as possible to extract as much value as possible. In a sense, the value is skimmed from monetized neglect - not monetized eyeballs. Feels to me like the whole structure will fall over if we ever really figure that out or decide this sort of thing is no longer acceptable in a society.

Is that a good conclusion? Not sure. Still thinking.