Things I learned from my High School science teacher 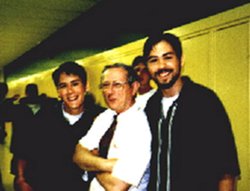 That’s not actually me in this picture: It’s something I found in an archive of a defunct GeoCities page, from who knows when. (Though, apparently, it was forged in the era of the Counting Crows.)

But, anyway, that’s Mr. Sabo there in the middle. He was my High School science teacher, and nearly every day I remember something that he taught me. Let’s see if I can come up with a few off the top of my head…

I don’t know what Mr. Sabo is up to, these days. I heard he retired—good for him, sad for students. If he or anyone he knows ever reads this, I just want to say this: Thank you so much for teaching me so much. My brief time in your class had an astounding affect on my life.