On the Yak Shaving Habits of a Writer

TL;DR: Writing is apparently so important to me that I procrastinate like crazy rather than risk failing at it. 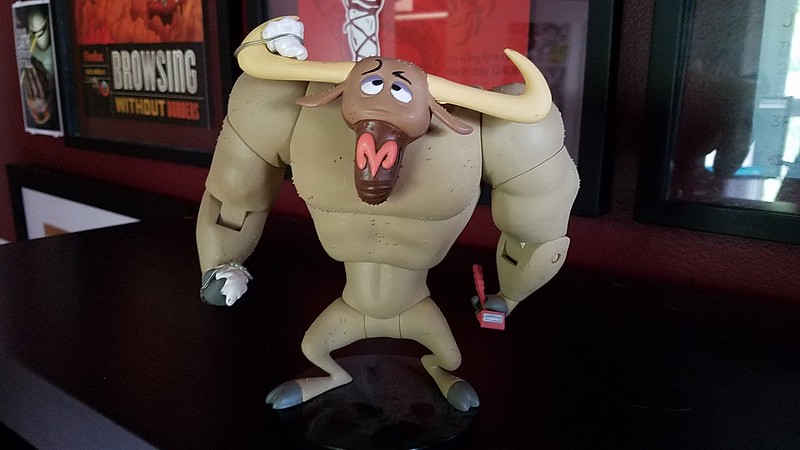 In composing this, I fully recognize the danger of disappearing up my own backside. The thing is, I want to write more. And, it was pretty cool I managed to get something posted last night. But, the process of doing so ended up way more convoluted than it should have been. So, I want to share the story and invite public ridicule.

So I told myself that I should do some writing tonight, but now that it's tonight all I want to do is drink booze and play video games.

It started with yesterday morning's journal pages. I told myself it was a good night to get this done. I made plans to start working on it after dinner. I cooked dinner. I ate dinner and had a beer. I sat down on the couch... and all I wanted to do was anything else but write.

Let's see, what did I do instead? I'd mused in my journal that I needed a different venue to get myself into the ritual mindset to write. I write my daily pages at the kitchen island over breakfast. That's a way easier environment for focusing on that task than my workaday desk with my laptop and all that entails.

So, that means I went to the kitchen island with notebook & pen and started writing, right? Nope.

I went to the basement to dig out an old laptop. I wanted something to write a blog post with fewer distractions. I dug up a ChromeBook, a MacBook, and an Android tablet with a keyboard. Surely one of those things would be handy for writing! (Why I didn't also dig up my old 80x24 DOS palmtop from 1993, I'm not sure. That thing's nifty and I used to write with it back in college!)

So, that means I went to the kitchen island with notebook & pen and started writing, right? Nope.

On the way out of the basement, I noticed the unassembled comic book boxes I'd been meaning to put together. So, I put them together. I considered reorganizing some comics from their 20+ year old boxes into the new ones. But, no, I decided: That was too far off task. I'll get to that later.

Continuing on, I considered my Tempest arcade machine. The screen's still not working on that thing, and I've been meaning to fix it most of the last year. I moved to pop open the back, but stopped. Again, too far off task!

I made it upstairs with the laptops and the tablet. I got to the kitchen and plugged things in to charge. The tablet wouldn't get past the boot-up screen. Okay, forget the tablet. The MacBook booted into... Ubuntu Linux? I forgot I did that with this machine. I forgot my password. Wi-fi didn't work. Deal with that later.

The ChromeBook booted up fine. But, for some reason, I suddenly decided it needed to have Crouton and Ubuntu installed. You know, so I could run git & node & gulp to preview my blog post and publish when I was done. So, I started on that. Crouton's nifty and it was up & running with less fuss than I expected. I got all my tools installed, and had my blog building before I knew it.

Then, around 10pm, I moved back to the couch and my Windows PC. I opened up a text editor, a shell running my blog, and a browser for previews - all of which, mind you, I've had set up and working fine on that Windows machine for the past year at least. I put on headphones and started Killing Joke on Spotify. I assembled photos and drafted the blog post for GameChord. Finally, around 3am, I published it. Then, I went to bed.

Finally wrote about GameChord, the little 1-handed keypad I made this summer https://t.co/fUCv6o5M6l

So, umm, yeah. Did you notice that I never used the tablet, the MacBook, or the ChromeBook at any point? The comic books didn't come in handy, either.

Recently, I built worktables out of 2x4s and plywood. It was my first time really working with wood since shop class in High School. But, I did it: Found plans. Found a lumberyard. Got lumber & tools. Picked a weekend and got super sweaty in the garage making lots of mistakes with wood. I produced a pair of crude but solid worktables.

Building GameChord was similar: I started researching & tinkering until I had something working. I even managed to get myself out of the house to talk to actual people and join up as a member at i3Detroit. No small measure of social terror involved, there. It took me a few months, but I managed to move the project along to completion.

But, somehow, the notion of writing drives me to insane yak shaving diversions in the basement.

This morning, back at the kitchen island, I had a post-mortem over coffee. What I managed to wring out of myself is that I've stuck writing up on a scary high pedestal.

If I don't make another table or keyboard, that's cool: I've never considered myself A Woodworker or A Keyboard Maker. Those things aren't as crucial to my self-image, I guess. For as long as I can remember, though, I've wanted to be A Writer. The trouble is that actually engaging in the process of writing means I might discover that, you know, I might be Not A Writer.

How to get past this?

The funny thing is that I have written a bunch. I really like words. I've been told I'm good at it. A book publisher even paid me for it, more than once!

I also know I produce some terrible stuff. But, writers I admire have admitted the same. The key is to just keep writing and get better. Clean up the junk in editing.

What to do, then, to stop all the procrastination & avoidance?

The best answer I have is nothing clever: Write more. No lifehacks. Just get over myself and write more. Be a writer by writing and let the failure wash over me. Then write some more - maybe even write about feeling like a failure. Write embarassing things and invite ridicule. Disappear up my own backside and turn inside out. (Wait, that last one sounds unpleasant. I should edit that out.)

Anyway, I guess I don't really have a conclusion. Do you, dear reader, have any better advice? I'd like to hear it.