TL;DR: I made a USB keypad that's good for gaming and typing entirely with one hand.

So, remember back in February when I said that keyboard hacking seems like fun? Well, I finished this GameChord thing back in July after about 5 months of occasional work. But, I've been too busy drinking booze and playing video games to get my butt in a chair and write about it. 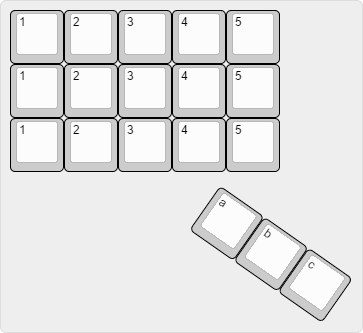 I started doodling with key layouts and came up with this. Only 18 switches, but enough for gaming. At the time, I was putting a lot of hours into Elite Dangerous, so this felt promising as a spaceship control pad. 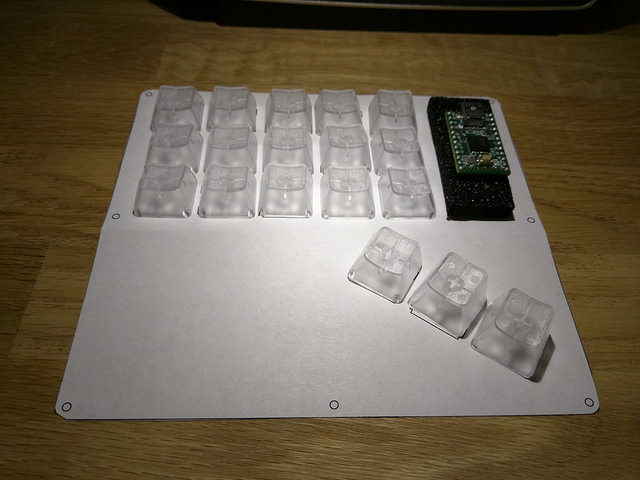 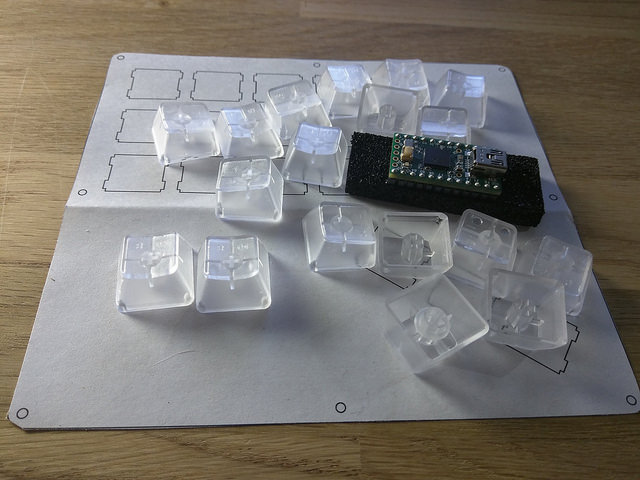 Over on builder.swillkb.com, I plonked in the JSON from Keyboard Layout Editor and came up with some SVG files that printed up nicely.

That gave me a paper mockup of a mounting plate for key switches. I had some clear keycaps, so I dropped them onto the paper to get a sense for how it would feel under my hand.

Of course, cats happen - so those keycaps didn't stay put for very long. But, that's okay. Nothing wandered off too far, and I got what I needed from the mess on my desk.

Back when I first started thinking about building a keyboard, I assumed I'd send off whatever design files I came up with to a place like Ponoko and get the mounting plate made for me.

Prices at those places were just a bit higher than I liked, though. I also suspected things wouldn't work with my first attempt. I wanted to be able to iterate without it taking days or weeks to learn from my mistakes and refine.

That's when I remembered i3Detroit was just down the road. I'd been meaning to get over there for a couple of years: Among other things, the space has nice laser cutters that I really wish I'd used back when I butchered some plastic to make a terrible PC monitor case.

A month or so later, I'd gotten through the new member onboarding process and a few training sessions with the laser cutter. I had some acrylic sheets still on hand, so I gave my design a shot: 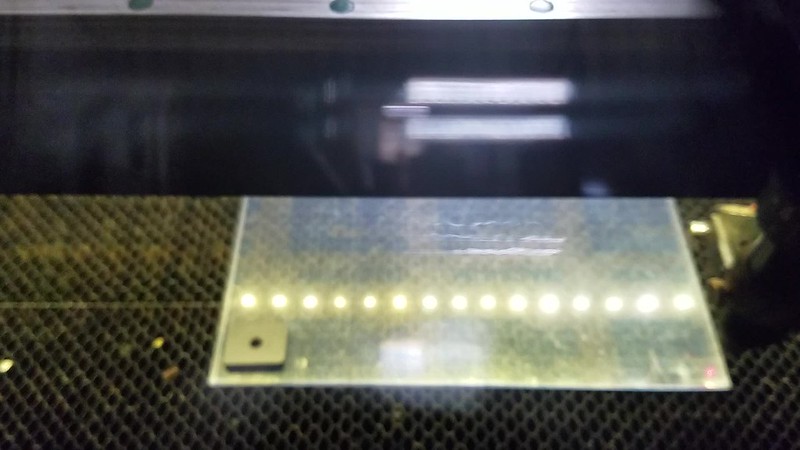 Pretty sure I had the power too high and the speed too low for the run in this video. But, the result was not too bad for a first attempt. I had a few dozen Cherry MX Clear switches to play with, so I snapped them into the plate and put on the keycaps I'd used in the paper mockup earlier: 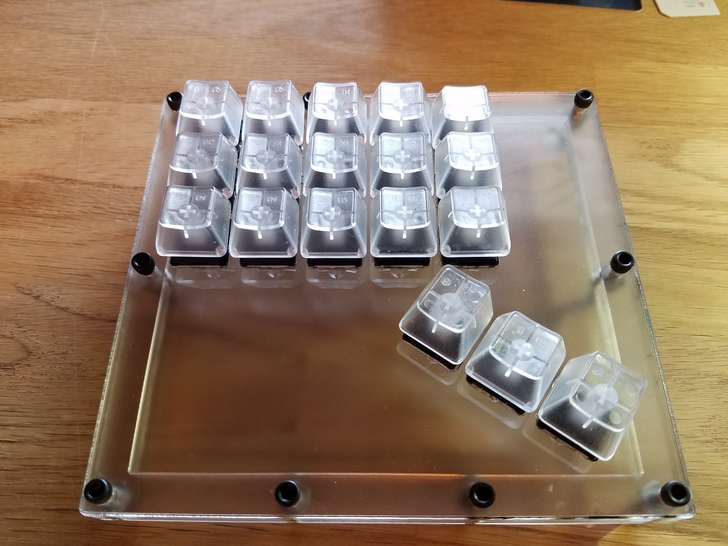 Still lots of work ahead, but I was feeling pretty accomplished after taking this little glamour shot. I even took it into an i3Detroit member meeting for show & tell.

At this point, I'd already heard the term "kerf". Like a saw blade, the laser has a width that destroys material while cutting. You want that on the inside edge of something like a key switch mounting hole, in order to keep the dimensions correct. Unlike a blade, the laser is a cylindrical beam that passes through a lens to form something like an hourglass. So, the kerf's shape depends on the lens focal length and the conical section that intersects with the material.

Well, I didn't account for the kerf well enough in my first plate. All the key switches were wobbly. Some would just fall out if I flipped the thing over. Time for some of those iterations I figured I'd have to end up doing. 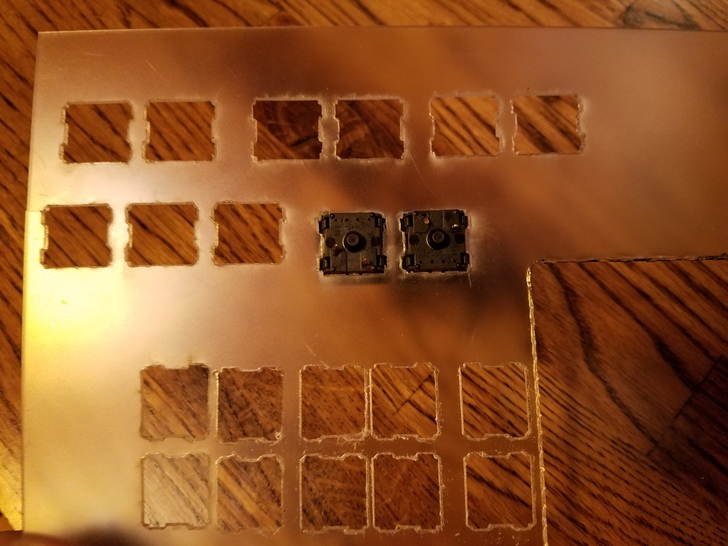 I know the saying is "measure twice, cut once" - but in this case it was easier to measure by cutting! I tried mounting holes with a sampling of kerf widths until I found one that matched the key switch tolerances. Not so snug that it cracked the plate, but not so loose that it wiggled or fell out.

Once I found a good laser focus and figured out the kerf, I attacked another sheet of acrylic with the laser to produce another iteration of the case. 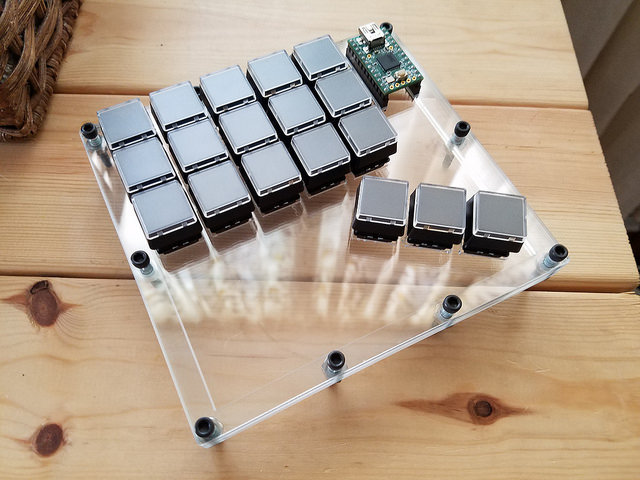 Two changes you might notice: I added slots to glue in some socket headers, so I could unplug or replace the Teensy without soldering. I also found some relegendable keycaps on Massdrop - they have little removable covers that take 14mm paper squares. I figured that would come in handy for crazy key layouts I might come up with.

Wiring up the key matrix

I haven't learned how to design circuit boards yet, so I figured I'd just handwire this like I saw in the video. Only 18 switches, so how bad could it be? Turns out, it's rather annoying. Interesting exercise with my terrible old Radio Shack soldering iron. 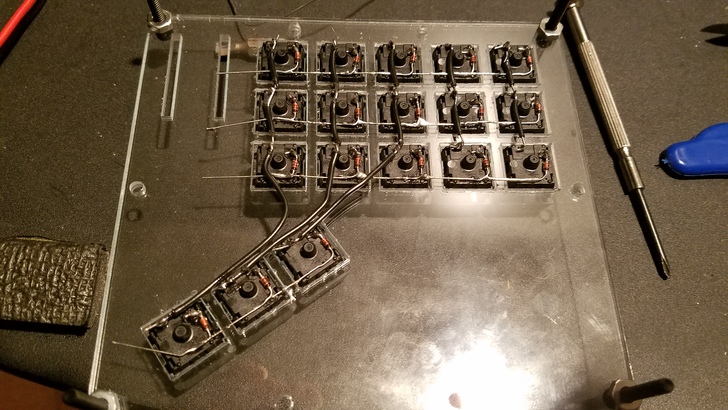 I think I'd much rather get over that PCB fabrication hurdle for when I try scaling this up to a 60% keyboard like my HHKB.

The technique here involves first building up rows of diodes across the right-hand pin of every key switch. The diodes serve to prevent ghosting when multiple keys are pressed.

Then, I stripped sections of wires to run as columns down the left-hand pin of the switches.

The remaining insulation ensures the column wires don't short against the row diodes.

Wiring up the Teensy 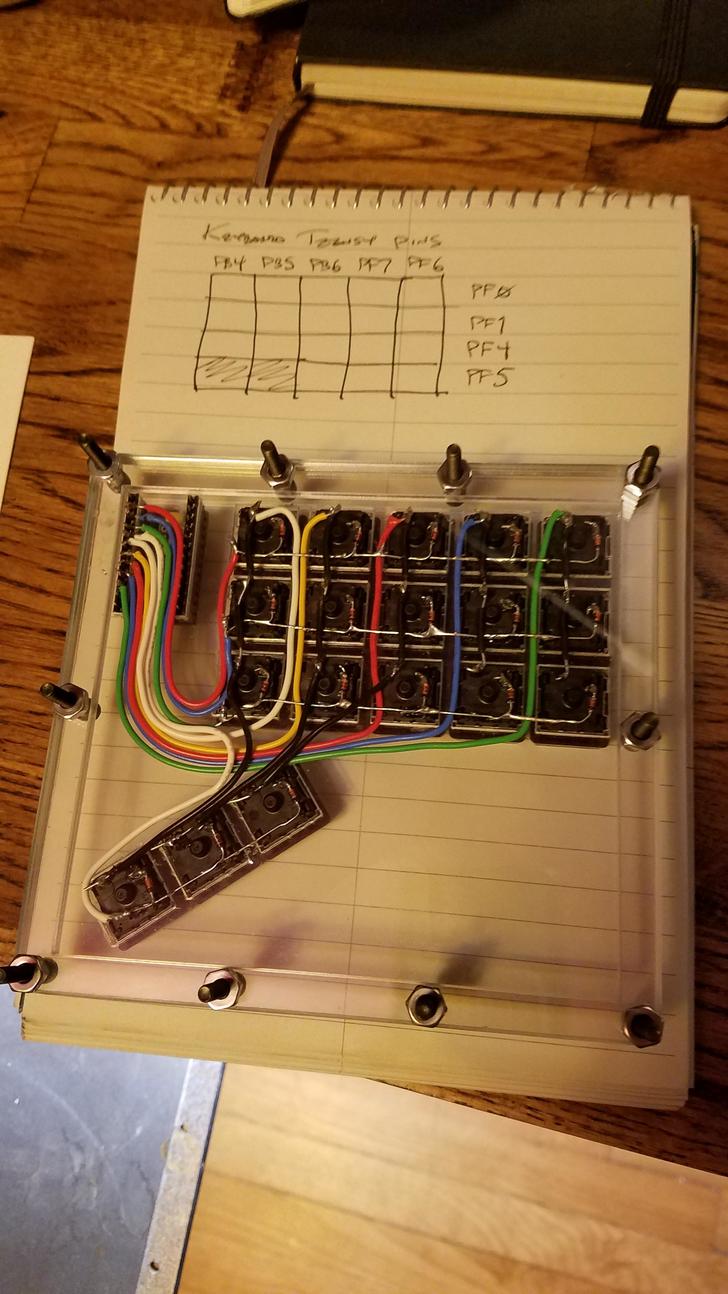 This matrix gives me 4 rows (counting the thumb switches) and 5 columns - or 9 I/O pins to scan 18 switches.

Except for magical PD6 - which is hardwired to an onboard LED - just about every pin is fair game on the Teensy for rows or columns.

So, I tried to pick a set that would be easiest to route wires. Since this case is transparent, I wanted to keep things visually interesting with different colored wires and a neat shape to the runs.

Of course, I botched things a bit and marred the acrylic by splashing solder and slipping with the iron a few times. But, maybe no one will really notice.

If I had to do this over again - and I still hadn't learned how to make a PCB - I'd probably try using something thinner like 30AWG repair wire. That seems like it would thread through the spaces much better, which would be even more important for a board with many more switches.

I based the GameChord firmware on the great tmk firmware that seems popular on mech keyboard forums.

Building the matrix was easy: The firmware scans through rows (DF0, DF1, DF4, and DF5) by pulling each low in turn. The columns (DB4, DB5, DB6, DF7, and DF6) are set as "active low" pins - which means keys pressed in the current scan row get connected to ground and read as signals. So, I wrote the functions to manipulate & read the appropriate row & column pins, respectively.

It was almost too easy:

Holy crap. My attempt at setting up firmware for my newly wired DIY keypad worked first time. How does this happen. https://t.co/xWESzku4Lp

From there, I built a dead simple key map with just enough keys to play Overwatch:

I got it all working and had myself a nice evening of pushing carts and taking objectives. 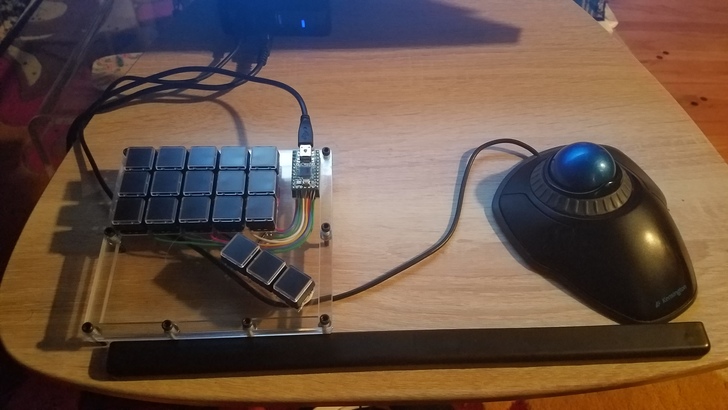 I had all these relegendable keycaps and this crazy flexible tmk firmware - so I decided to try implementing a complex and fully impractical keymap based on chords with the thumb keys. 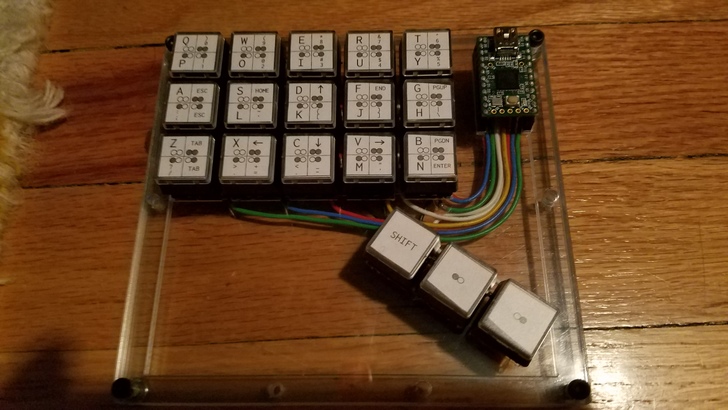 Given two thumb keys in combination, I can get 4 layers out of the other 15 keys - for a total of 60 keys. The firmware also lets me distinguish between keys held or just tapped, which gives me a few more layers or modifier keys.

Long story short, I can get most of the functionality of a regular keyboard out of just one hand. All I have to do is just get used to putting my left hand through some very awkward and uncomfortable contortions until I get up to full typing speed!

As I've written before, I do really like odd input devices. But, this got old fast. This isn't so much a practical peripheral as a thing I did because I could. It gave me an excuse to explore the firmware more and to use Inkscape to design some legends for my nifty keycaps.

And just to wrap things up, this happened:

This was the first summer I went to Maker Faire Detroit as a Maker. I helped for a bit at the i3Detroit tent, mainly just standing and smiling at the front table as folks walked in. But, I had my little keyboard out there on a table, with a project card and everything.

It and I were only there for a handful of hours, but it's pretty satisfying to have actually gotten this thing done!