Gaming from the Orchard House couch

I like playing video games; it’s one of my favorite things in life. I also like hanging out with my wife; she’s my favorite person in the world. This is a post about ensuring these two things can happen together. This is also a post where I played with SketchUp for the first time.

The nightlife at Orchard House 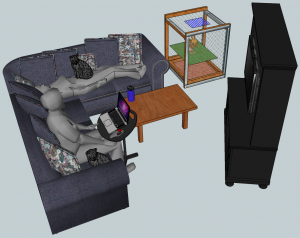 Here, on the left, you can see a scale model of evenings at Orchard House. Alex and I like to spend nights making fun of crappy TV, piddling around on our laptops, and attracting household pets. (Yeah, I had a little too much fun playing around in SketchUp tonight.)

So, when I play video games, I don’t usually take over the TV – at least, not until later in the evening, when the girl succumbs to napping and I feel like firing up the Xbox. What I’ve ended up with for most nights, then, is running games from Steam (I’m lmorchard) on Windows 7 running on a 2010 MacBook Pro 15″ via Boot Camp.

This is less than optimal, but it works tolerably for many fun things. 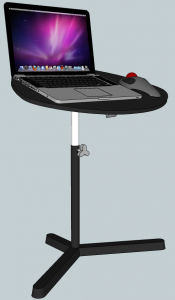 Let’s zoom and enhance, because I can do that in SketchUp. On the right, you can see a model of my gaming rig. It consists mainly of the aforementioned Apple MacBook Pro, an Ikea DAVE laptop table, and a Logitech Trackman Marble Mouse.

I really like the DAVE table – we’ve accumulated 4 of these things at last count. They’re cheap – easily had from Ikea for around $20 – and go together in 2 minutes. I’ve used them instead of buying $400 ergonomic keyboard trays for my desk. (I really missed those, when I left Yahoo!)

I even took one outside to make working on the deck easier on my wrists. And, of course, I’ve been gradually evolving one into a couch computing station. 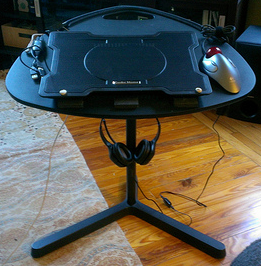 Here on the right is a picture of my couch-side DAVE, sans MacBook pro. The big thing is a Cooler Master NotePal X-Slim Cooling Pad, because my laptop has a habit of overheating and shutting itself down in the middle of Windows games, especially in the middle of summer.

I’ve also been cycling through different pairs of headphones, and am currently trying out a pair of Logitech H800 wireless headphones. (The Plantronics 355’s in the picture had been turned wireless when the bunny hopped by and gave it a nip. So, I took the hint.)

Thoughts on a new gaming rig

Like I wrote earlier, many fun games can be played tolerably well on this 2010 MacBook Pro in Boot Camp. But, this is suboptimal and a dead end for upgrades where it matters. I could get an updated laptop, but that’s just kicking the can down the road. And besides, this machine is intended more as a productivity machine for me than gaming.

I could also buy a real gaming laptop, but those things are expensive – and also less than great for upgrades. 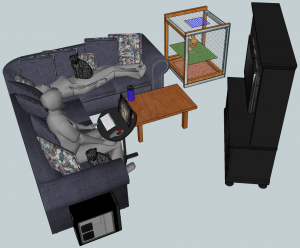 What about a desktop gaming PC? It’s been a long time since I last built a PC – something on the order of 10 years. But, it seems like this would be the cheaper and more easily upgraded route

The deal breaker, though, is the desktop part. Like I said, I like hanging out with my wife on the couch – I’m not going to wander off to a desk by myself to indulge my gaming hobby. If I had to choose, my wife wins every time. She’s my best friend.

So, pictured above, I’m thinking about what it would take to replace my laptop with a desktop at the couch. I need a monitor that fits on my DAVE, and I need a place to stick a big box. 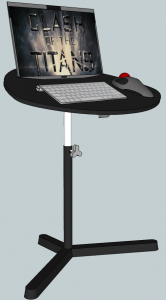 Let’s zoom & enhance again, on the right. Basically, what I’ve mocked up here is the LCD panel from my laptop torn off and bolted to the DAVE. I’ve got an Apple Wireless Keyboard there. But, it could just as easily be a Happy Hacking Keyboard, if only I’d found the right model in SketchUp. Maybe I’ll even get “serious” and look into a gaming keyboard with a numpad.

Unfortunately, I can’t seem to find a decent off-the-shelf LCD monitor that won’t crush the DAVE and yet has as nice a resolution & density as my MacBook Pro display. But, after a day of musing on Facebook and poking around on eBay, I found an exciting lead.

This seems pretty nice to me, since it’s slightly better than my current laptop and will sit less than 2-3 feet from my face. Worst case, I can use it as a second monitor for my desk. Or, I could move the Xbox to under the couch and hook it up on the HDMI input. I could even use headphones, since the display interface board has an output jack.

I’ll have to fabricate some sort of housing for the display, and find a way to attach it to the DAVE with friction hinges. Since this will be in the living room, it also wouldn’t hurt if the result looks clean. I’m hoping this won’t be an impossible task, despite my carpentry skills having last been exercised in high school shop class almost 20 years ago. Less than 10 miles from me is i3Detroit, an awesome maker space, so I could avail myself of some tinkerers there. 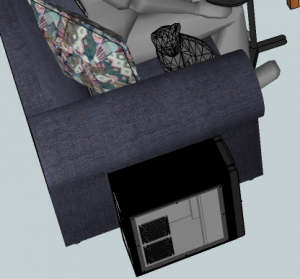 Let’s zoom & enhance on that PC tower. I’ll stub my toes on it, as I wander to and from the kitchen. And, that girl I like hanging out with will probably brain me with it. That thing is not going to fly.

Ideally, I’d love to stash it under the couch. But, under the couch gives me only about 4″ of clearance. I think most of the video cards I’m considering are taller than that, let alone the cases.

Other options might include hiding it behind the couch, but only if it doesn’t have howling turbines that prevent the girl from taking the naps mentioned earlier. We also have an entertainment center, which could be an option if running cables across the room isn’t ugly and if they don’t become bunny food (see aforementioned headphones). Oh, and the entertainment center is poorly ventilated.

Maybe behind the couch is the best option, assuming everything but the monitor is wireless.

Living in the Post-PC future

So, assuming I get this display panel working and mounted, and I find a place to stick the PC case, now I have to figure out what to stick inside the case. My budget is not infinite, but I’m curious to see if I can keep it under $600. But, I’m so out of the DIY PC loop, that I don’t even know if that’s a sane ballpark for satisfying gaming.

On the one hand, I think I’m relatively easy to satisfy. After all, I’m putting up with games on this MacBook Pro that sometimes never get more than 15-20 FPS. Ideally, I’d like to blow well past that – that’s the whole point, really. But, I don’t need insane bells & whistles that I won’t appreciate on this 17″ 1920×1080 display. I’ll also never ever bother with 3D. It would just be nice, for once, to get high frame rates on at least last year’s games.

This is where my ideas run out, and I need to do more research and bug some friends. But, that’s okay, because I think this is a relatively boring part. What’s in the box is less interesting to me than where to put it and how to hook it up at the couch.

Still, let’s see where I end up going with this. More updates after I get delivery of this LCD panel.